Yesterday was election day, and many people were wondering if the Republicans would be able to keep the Senate. In Des Plaines, Illinois, however, a bunch of people were wondering if they’d be able to keep their property. The city has a referendum on the ballot for the Rand/River Five Corners TIF district that could result in a lot of buildings being taken by eminent domain.

For example, if a town wants to rebuild a road, it can issue bonds which it pays back by declaring a TIF district for the areas served by the road. When the road is rebuilt, it will presumably raise property values in the area, which will increase the amount of property tax paid by land owners. The original amount of property tax—the amount that would have been paid if the road repairs had not raised property values—will continue to be used for the usual purposes, but any increment above that will be used to pay off the loans used to build the road or to fund further improvements.

At least that’s the theory. In practice, there seem to be a lot of ways to abuse TIFs. For some examples, see Ben Joravsky’s articles in the Chicago Reader about TIF abuse in Chicago, where it appears that private property is a legal fiction, and all land use is subject to the whims of politicians and the people connected to them. The more I read about TIFs, the more they horrify me.

However, the many ways to abuse TIFs are a subject for another day.

What concerns me right now, is that the Five Corners TIF in Des Plaines will be used to finance the eminent domain purchase of a lot of private property (such as the Geiser-Berner plumbing, heating, and air conditioning business pictured above), which will then be turned over to developers. The justification is that the developers will do something with the land that increases its value, thus increasing tax revenues for Des Plaines.

The Five Corners TIF (also known as the River/Rand TIF) is the fourth project in my photo-essay series on eminent domain. Until now, I’ve only been photographing relatively small sites such as the Sportif bike shop in Chicago or the five small multi-unit dwellings at the Hartung Quarry Landfill. The largest site I photographed was International Plaza in Arlington Heights, which was a mid-size shopping mall.

By comparison, the Five Corners TIF is stunning in its size and scope. Here’s a satellite shot via Google Earth: 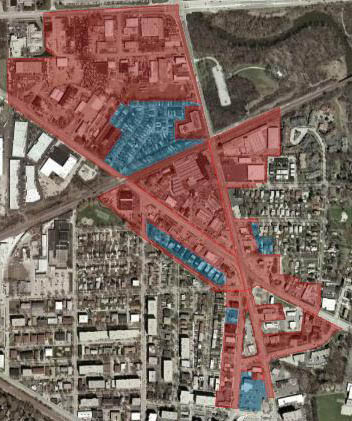 The red areas are parts of the TIF that are on the acquisition map, meaning they would be bought up for the project. (Technically, the TIF proposal says the properties are just under consideration for acquisition, but they won’t necessarily be condemned as blighted.) The blue areas are areas that won’t be acquired (no eminent domain) but which are still part of the proposed TIF district.

It’s hard to grasp the size of this area from the small image above, so you might want to click through to a larger image, or view it on Google Maps. The best option is to view it using Google Earth if you have it.

(I created all my maps by looking carefully at the maps in Des Plaines’ online materials about the Five Corners TIF and trying my best to match them to features visible in the satellite images. Please don’t rely on the accuracy of my maps for anything important.)

The TIF battle in Des Plaines has been going on for about a year. The Castle Coalition has a summary of it in the Illinois chapter of Opening the Floodgates. From what I can tell, this has accomplished two things. First, Des Plaines has backed off from acquiring the residential properties, including a trailer park. Second, the opposition gathered 3000 signatures to get yesterday’s TIF referendum on the ballot. As I write this, I don’t know if the referendum has passed or failed.

Sadly, even though the TIF opposition has picked up a lot of support (as evidenced by these signs in front of people’s houses more than a mile and a half outside the TIF district) it probably doesn’t matter whether the referendom passes because it’s non-binding. The city of Des Plaines can ignore the results of the vote and proceed with the TIF anyway. In fact, the City Council has already announced its intent to do exactly that.

That doesn’t mean the fight is over. There’s almost certainly going to be a court battle.

These are not the last pictures I’ll be taking of the area, either. The Five Corners TIF is so huge that it’s going to take me weeks or months to really explore the area and get pictures of all the properties affected. I’ll be posting a multi-part series showing photos of some of best and worst of the area, and probably everything in between.

I’ll also be explaining my theory about why the area has the problems it has…and why the proposed TIF isn’t a solution.