There’s folks who say (I’m one of them) that the MCPPA is one of the best carry permit laws in the country.  They — we — have a point.

Quick digression:  I’m occasionally praised for being one of the folks who helped write the law.  That’s flattering, but it’s not true; I’ve learned a fair amount about how to draft legislation since, and do have some future plans to help write some in the future, but, just to keep the record straight:  I had no hand at all in authoring the bill.

(In fact, because I was involved in writing the book at the time that the law was being negotiated and drafted, Joe Olson and I made the decision that, for ethical reasons, I was to be kept out of the loop on the discussions, so as not to unfairly disadvantage a — hypothetical and nonexistent, as it turned out — competitor.  In retrospect, I think we bent over too far backwards, but . . .)

While the main author of the bill was Lynda Boudreau, then a member of the MN House, most of the language was drafted by Joseph Olson and David Gross.  It’s hard to overstate the importance of Joe in the modern Second Amendment movement, so rather than get into it, just take my word for it:  he’s one of the giants.  It’s easy to understate the importance of David’s contributions; David does it all the time.  While Joe had a lot of trial experience in his younger days, he’s mainly been an academic for some decades, now; David’s experience in the trenches — and the lessons learned from that experience — was critical.

One of the problems facing anybody crafting a carry law is this:  who should and shouldn’t get a permit?  One view — and it’s mine — is that the Second Amendment simply recognizes a right, and that there should be no need for permits at all; we don’t, after all, have to get a religion permit in order to be able to fast on Yom Kipper, attend High Mass, or head over to D’Amico to worship the Flying Spaghetti Monster by consuming the traditional zuppa de clams, after all.

But, as a practical matter, that wasn’t what was going to happen in Minnesota in 2003 — or probably ever.

Another view — which I reject — is that carrying a handgun for personal protection is a great privilege, which only the most special people should be allowed to have.

The MCPPA strikes a balance.  As a matter of presumption, just about anybody who is legally entitled to possess a firearm at all, and who has gotten what can be comically minimal training in the safe use of a pistol —

(b) Basic training must include:

(1) instruction in the fundamentals of pistol use;

(2) successful completion of an actual shooting qualification exercise; and

(3) instruction in the fundamental legal aspects of pistol possession, carry, and use, including self-defense and the restrictions on the use of deadly force.

— gets a permit within thirty days of applying.

But, you might say, what do you do about the borderline cases?  Let’s say you have some raving nutcase who is able to get through a minimal carry class, and who hasn’t gotten in such serious legal trouble that he’s forbidden from so much as possessing a firearm, even under supervision — are you saying that he gets to wander around with a loaded handgun, until he commits a felony?

One simple solution would be to give some governmental authority — the local sheriff, say — the right to decide that some applicant was just too dangerous and nutty to be wandering around in public with a loaded gun.  And that would have some benefit to it, sure.  But it would also have some risks:  what do you do about a sheriff who goes beyond that?  Historically, in Minnesota and everywhere else, anytime you give some politician or government official any power at all, some are going to abuse it.

And there was a real history of permit denial abuse in Minnesota.  The Richfield police chief famously said that, as far as he was concerned, if you’re running down the street being chased by an axe murderer, you shouldn’t be able to have a gun to defend yourself.  (No, I’m not making that up.)

Which is why the MCPPA provides both authority to the sheriff, and a check on it.

(a) The sheriff must, within 30 days after the date of receipt of the application packet described in subdivision 3:… (1) issue the permit to carry [or] … (3) deny the application on the grounds that there exists a substantial likelihood that the applicant is a danger to self or the public if authorized to carry a pistol under a permit.

Hmmm… so the sheriff can deny a permit to a known knutcase, even if he isn’t legally barred from handgun possession. But what, you ask, is to stop the sheriff from just denying it to, well, everybody?  Yeah, sure, somebody can take him to court, but that gets expensive.

And here’s where Joe and David were stone fucking brilliant; I’m going to quote the whole subdivision, adding some emphasis:

Subd. 12.Hearing upon denial or revocation.

(a) Any person aggrieved by denial or revocation of a permit to carry may appeal by petition to the district court having jurisdiction over the county or municipality where the application was submitted. The petition must list the sheriff as the respondent. The district court must hold a hearing at the earliest practicable date and in any event no later than 60 days following the filing of the petition for review. The court may not grant or deny any relief before the completion of the hearing. The record of the hearing must be sealed. The matter must be heard de novo without a jury.

(b) The court must issue written findings of fact and conclusions of law regarding the issues submitted by the parties. The court must issue its writ of mandamus directing that the permit be issued and order other appropriate relief unless the sheriff establishes by clear and convincing evidence:

(1) that the applicant is disqualified under the criteria described in subdivision 2, paragraph (b); or

(2) that there exists a substantial likelihood that the applicant is a danger to self or the public if authorized to carry a pistol under a permit. Incidents of alleged criminal misconduct that are not investigated and documented may not be considered.

(1) was erroneously identified as a person in the data system;

(2) was improperly included in the data system according to the criteria outlined in section 299C.091, subdivision 2, paragraph (b); or

(3) has demonstrably withdrawn from the activities and associations that led to inclusion in the data system.

(d) If the court grants a petition brought under paragraph (a), the court must award the applicant or permit holder reasonable costs and expenses including attorney fees.

That last paragraph isn’t just unusual in carry laws; it’s unique.  And it provides a good, albeit imperfect, check on bad judgment or bad faith by the sheriff:  while the denied applicant does have to come up with some money — usually around $3000 — for a lawyer, if he wins, the court must order the sheriff to pay him back.

Nobody’s perfect, not even — maybe particularly not — guys with badges. And it works both ways to correct errors.

Let’s take a perhaps not entirely hypothetical case.  Some guy with a history of relatively minor brushes with the law — interfering with a 911 call, a couple of disorderly conducts and two DWIs, say, manages to get through some sort of carry class at local gun shop — and applies for a permit.  Looking at the application and his criminal history, the deputy says something like, well, Josh hasn’t been in trouble again for a few years; maybe he’s gotten his act together — let’s just cut the guy a break, and issues the permit.

Well, maybe it was the right call at the time; maybe not.  But let’s say that this perhaps hypothetical guy goes on to pick up another DWI, a third and then a fourth disorderly conduct conviction, and tops it off with a 5th degree assault when he peppersprays a customer at his security guard job, and spends thirty days in jail.

Is the sheriff out of luck just because none of those are felonies?

Yup.  Every year, the sheriff has to redo the electronic background check at least once, and can do it at any time.  And if he finds that there is, as the law says, “a substantial likelihood that the applicant is a danger to self or the public”?

The sheriff … may file a petition with the district court therein, for an order revoking a permit to carry on the grounds set forth in subdivision 6, paragraph (a), clause (3).

Pretty neat, eh?  Which is among the many reasons why, in the greater scheme of things, the MCPPA is probably the model against which other modern, mainstream, commonsense “shall issue” carry permit laws will be measured. 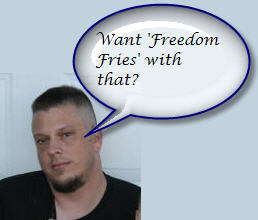 Oh — and as a minor thing: it’s also why one village idiot (pictured at right) will likely be getting a knock on the door, sooner than later, and finding a deputy serving him with his copy of a revocation petition.

Where else to find me