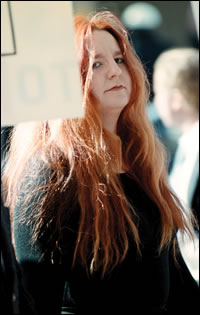 That’s her, at right, in a photo from around 2003.  She is apparently as uncharming as she looks, and calling her a Feminazi is only fair, because she’s the closest thing the neonazis have to a feminist, okay?

Okay.  Fine.  If she happens to be out walking someday and a cow falls out of a clear blue sky to squash her flat, that would be a sad thing only because it would be a waste of a good cow.  Got it.

But, alas, what she’s apparently been charged with an is, basically, blogging and photograpy. The scumbag neonazi bitch has a blog; she makes comments hostile to, and posts snapshots of some local cops.

Well, blogging and photography aren’t a crime, and it would really be a shame — really — if all of our civil rights were further degraded because people wouldn’t support the rights of this feminazi scumbag to write and to take pictures.

So:  please support the rights of this feminazi scumbag.  It’s important that her case get coverage, and that she be acquitted of the absurd chages.

Damn.  Well, you don’t always get the good poster boys and girls on this civil rights stuff.  Yeah, sometimes you luck out and get a real hero like Rosa Parks, or Savana Redding.

But most of the time it’s scumbags like Ernesto Miranda or Elisha Strom.