Google just released the next version of their Keyhole software. It’s called Google Earth, and of course it’s a beta release.

(Update: All I got was a message from a Google email address saying that they were making the beta available to current Keyhole subscribers, which I am. The message included a download URL that has a parameter that looks like some random key that probably links it to my keyhole license. Otherwise, I would have posted the link. More about the release here, and here’s a link to the original Keyhole software.)

I first heard about Keyhole last October when Google bought Keyhole Corporation. I use Keyhole LT—the non-professional version of the Keyhole software—and it’s a fascinating piece of software that allows you to view satellite imagery in an intuitive way.

Although it seems likely that the satellite images in Google Maps use some of this technology, Keyhole takes it a few steps further. For one thing, Keyhole is a whole lot smoother than Google Maps imagery because it’s an application that runs on your PC and renders the images locally, essentially distributing this task out to the end-user’s computer.

The application starts with view of the whole Earth floating in space. 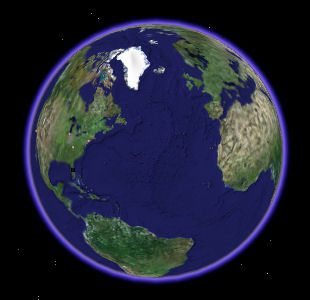 You can use your mouse to drag it around in any direction, and then you can zoom in and out with the mouse wheel. There are also controls to rotate the image and to tilt the camera up toward the horizon.

The program downloads images from the database in the background, leaving the user interface to run smoothly: Zoom in on a city and the display reacts immediately. The initial image is blurry, but as Keyhole downloads updates from the server, it makes the image progressively smoother. Naturally, it caches the images so that the next time you zoom in on the same place it’s clear all the way.

There’s nothing quite like the feel of zooming from the whole earth down to my condo building. I can even see my car in the parking lot.

Google Earth adds a bunch of improvements to Keyhole. The most visually interesting is the 3D buildings available in 39 cities. Here’s what Chicago’s lakefront looks like from the southeast with 3D buildings enabled: 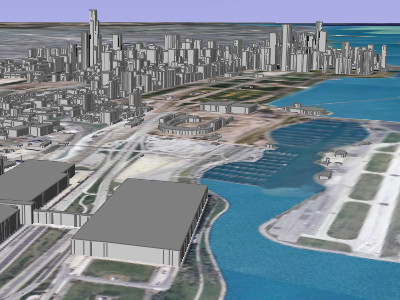 If you want, take a look at the whole Google Earth user interface. It’s prettier than the old one, and does some more stuff.

The most interesting new trick is the integration of Google’s Local Search and Driving Directions services directly into the application. You can search for local businesses or type in addresses and then generate a driving route between them. Here’s a simple route between two Wendy’s restaurants on the northwest side of Chicago: 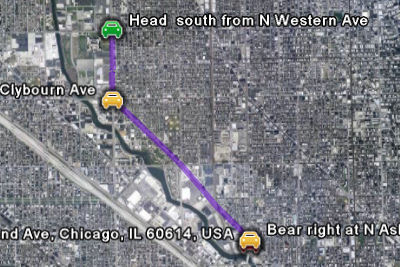 There are lots of other tweaks and changes. In particular, the program is faster now because it has been modified to make efficient use of Google’s servers to provide the images.

I’ve been waiting for this for a long time. It’s pretty cool.

Update: You can now add lines and polygons to your map markup, in addition to the point placemarkers it’s always had. Here’s the site of the crash of American Airlines Flight 191 on May 25, 1979, the worst single-plane crash in U.S. history: 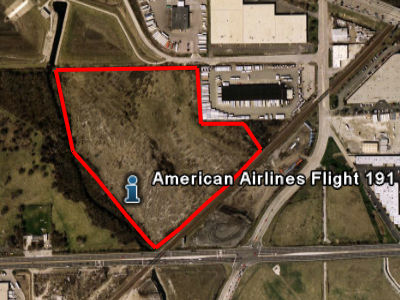 Update: Nope. Got that wrong. According to the NTSB report, the actual site is the field just to the left of the marked area.

Here’s the complete list of new features from the Release Notes:

[Note: Comments have been disabled because this posting attracts too many spam comments.]