A brief note to writers of military techno-thriller novels:

I enjoy reading your work, really I do. But my enjoyment depends on the assumption of accuracy. When you describe how an anti-ship cruise missile finds and attacks an enemy warship, I expect your description to be accurate, because part of the fun of reading military techno-thrillers is learning real things about the military and the technology. I understand that you’re writing fiction, and that some guesswork may be necessary when the technology is a secret, or when you’re writing about a planned future weapons system that doesn’t exist yet. But I expect that your guesswork will comport with known technology and, more basically, the physical laws of the universe.

Which brings me to something that at least a few of you appear not to grasp: Satellites cannot orbit over the north pole.

That’s just not how orbits work.

If a satellite is in Earth orbit, that means it’s going around the globe of the Earth in a circle, over and over. That circle might take it around the Earth from west to east, following the equator, or it might be a circle that goes around the Earth at right angles to the equator, passing alternately over the north and south poles, traveling from north to south on one side of the planet, and then returning from south to north on the other. These are called equatorial and polar orbits, respectively. The satellite’s orbit could be also be inclined relative to the globe of the Earth so that it is neither equatorial nor polar, but somewhere in between.

Basically, an orbit can be placed in any way you can imagine a circle going around a globe, as long as the center of the globe is somewhere in the middle of the orbit. But the orbit cannot just hover over the north pole, or orbit in a tight circle around the north pole, or some other random spot on the globe. I.e. This is not possible:

The satellite has to orbit around center of the entire planet. Everything in orbit is always in motion, and moving damned fast. A typical satellite orbiting at maximum speed just above the atmosphere is probably moving about 17,000 miles per hour. Satellites don’t stay anywhere for long. So when writers of military techno-thrillers start talking about satellites “parked over the north pole” — or imply that they are hovering over any location where the action is occurring for more than the few minutes it takes to pass over — it makes me wonder about all the rest of the technology they’re describing. How many other details are they just making up? Are any of those military tactics for real? Does any of this really make sense? That sort of doubt about authenticity takes away a lot of the fun of reading these thrillers.

Technical Addendum: As some of you may be aware, the preceding discussion is greatly simplified. I tried to limit it to just those orbital considerations that would matter in a techno-thriller.

Probably the first thing to note is that the speed at which an object orbits the earth depends on the height of the orbit. Gravity falls off with distance, so it takes less speed to hold an object in orbit at higher altitudes. In addition, the larger the circle of the orbit, the more time it takes for the satellite has to travel around a full orbit. This is especially important when an object is about 22,236 miles above the Earth, because at that height it will orbit the Earth slow enough that it takes a full day to complete an orbit. If this is an equatorial orbit, then the satellite will follow the rotation of the Earth, staying over the same spot on the equator for an entire orbit.

That’s called a geostationary orbit, and it is the only orbital solution that allows an object to hover over one location on Earth, and only if that point is on the equator. It’s a very useful orbit for many things. Weather imaging satellites will have a consistent view of their portion of the world, making it easy to observe changes over time. And if you have satellite TV, it’s the reason you can use a fixed dish to receive programs, because you’re pointing the dish at a satellite that’s in geostationary orbit over the equator, so it never changes position as seen from a location on the Earth’s surface.

Geostationary orbit isn’t so good for getting involved in combat, however, because the satellite has to be at a height of 22,236 miles (much higher than it appears in the image above, which is not to scale), which keeps it too far from the action in (or near) the atmosphere. Most of the really clear satellite images you’ve seen have been from satellites just a few hundred miles up at most, so geostationary orbit is a lousy location for a spy satellite. That far away, the resolution would be too poor to see much. It’s also much too far away to fire a missile or laser or kinetic weapon at a target inside the Earth’s atmosphere. I think a satellite at that height can probably see something obvious, like a rocket launch, and I believe that the U.S. military uses a few of them to watch for ICBM launches. And of course the satellites are good for communications. (And I think the U.S. military has some satellites up there just to observe other countries’ satellites.) But generally speaking, geostationary orbit is just not a good location for military techno-thriller action.

If a circular orbit at 22,236 miles high isn’t exactly over the equator, it will still rotate with the Earth, in what’s now called a geosynchronous orbit, then the satellite will oscillate back and forth across the equator, spending equal time in each hemisphere, and swinging north and south equal distances. (It will also oscillate east and west as it moves, so it traces out a figure-8 on the surface.)

If the orbits are much closer to the surface, then they orbit a lot faster and become useful for spy satellites and other interesting military purposes. And while the orbits follow the same path through space every time around, the Earth still rotates beneath them, so the orbital track on the surface moves westward with every pass, meaning the satellite eventually gets complete coverage of all of the the Earth between its highest latitudes on each side of the equator. In the extreme case, the the orbit is tilted away from the equator at 90-degrees, meaning it will go over both poles on every pass and the Earth’s rotation will allow it to cover the entire planet as it rotates underneath the satellite’s fixed orbit.

While satellites have to orbit the center of the Earth (they stay in a plane that passes through the center) those orbits don’t have to be circular. They can eccentric, which means that the orbit is elongated from a circle into an ellipse, with one end of the ellipse higher than the other. The highest point of the orbit and the lowest point of the orbit will be on opposite sides of the Earth. If eccentricity is zero, the orbit is just a circle, but as eccentricity increases, the more eccentric the orbit is, the greater the difference between the high and low sides, 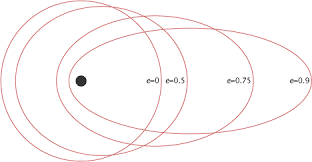 As satellites fall inward, they accelerate and whip around the Earth at their lowest point, called perigee, at their highest speed, and then slow down again as they rise up out of the gravity well, reaching the top of their orbit, called apogee, at their lowest speed. This gives them a lot of hang-time at their highest altitude, and if they are in a highly-inclined orbit, they will hang out over the high latitudes, which can be useful for surveillance, especially if several satellites are timed so that at least one is always over an area. In this sense, I suppose satellites can — not exactly hover — but at least increase the amount of time they are observing an area, albeit from a high altitude that reduces resolution of things happening on the ground.

(The same principles apply to orbits around the Sun. Halley’s comet, for example, is on a highly eccentric 75-year orbit around the sun, approaching to as close as 55 million miles — which is when it may be visible from Earth — and then receding to a distance of more than 3 billion miles, for an eccentricity of 0.96714. There are a large number of comets in eccentric orbits like this, and they spend much of their time in slow distant arcs far from the sun, some only returning to near the sun over periods of hundreds or thousands of years.)

As mentioned, if the eccentricity of a satellite’s orbit is between 0 and 1, it follows an orbit that is shaped like an ellipse, with the body being orbited located at one of the mathematical focal points of the ellipse. (Technically it is the center of gravity of the two-body system that is located at the focal point. But when one of the bodies is a spy satellite and the other is the entire planet Earth, the difference between the center of the Earth and the center of gravity of the Earth-spy satellite system is negligible.)

When the eccentricity hits 1, things get interesting, because the “high” part of the orbit becomes infinitely high. At an eccentricity of exactly 1, the orbiting body starts from far away and falls toward the Earth, passing it on one side, whipping around through its point of closest approach, and then leaving the way it came, never to return. As the eccentricity grows larger than 1, the arriving and departing paths spread wider apart, so that an object arrives from one direction and departs in another. This is called a hyperbolic orbit. 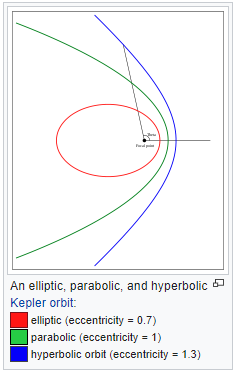 The hyperbolic orbits we’re most familiar with are those we create ourselves when we launch deep space probes to other planets. These only have the departing portion of the hyperbolic curve, and are commonly called escape orbits since the objects in question never come back. They basically start at the low part of the orbit when we launch them into space at the edge of the Earth’s atmosphere, and then we use booster rockets to accelerate them into hyperbolic orbits so they can leave the Earth and head for distant planets. In a few cases, these objects are following orbits that will leave the solar system entirely, so they are following the departing leg of a hyperbolic orbit around the Sun.

It’s possible to launch a satellite into hyperbolic orbits that leave the Earth on a path that is roughly in line with the Earth’s axis of rotation, so that it departs along a line more-or-less straight up from the North pole. (The conceptually simplest way to do this would be to fire them straight up from a launch pad at the pole, accelerating them until they reach escape velocity.) If the satellites are going fast enough, they will rise higher and higher and never return, all while staying above the north pole. In that sense, an object could be technically “in orbit over the North poll,” but it would be a very weird orbit that quickly puts it thousands and eventually millions of miles above the pole. That’s not the sort of trajectory would be useful for a spy satellite or a weapons platform or anything Earth-related. That’s the beginning of a deep-space flight.