Over at Simple Justice, Scott Greenfield is lamenting the fact that courts are requiring criminal suspects to leap ever higher obstacles to invoke their rights when being questioned by police.

Roland didn’t invoke when he said, “I ain’t signing shit without my attorney”?

See what they did there? The invocation must be “sufficiently clear so that a reasonable police officer would understand.” As bars go, it doesn’t get much lower.

Deputy Devost never questioned Defendant. Based on the circumstances here, a reasonable police officer would not have understood Defendant’s statement refusing to sign the consent to search form to be an invocation of his Fifth Amendment right to counsel.

In other words, the “without my attorney” only referred to his signing the consent form, not the refusal to subject himself to custodial interrogation. After all, didn’t Roland specifically say “I ain’t signing shit,” not “I want my attorney”? What more could you possibly expect of a reasonable police officer? They’re not mind readers, you know.

In the comments, someone going by the moniker JAV sarcastically asks:

If I printed the statement on cards and handed it out to an officer, would that work? The communication is non-verbal, but is more permanent. How big would the type have to be? Will 12 point type work, or should I go with 20 in case the officer needs glasses to read?

Funny you should ask, JAV, because here in these parts the Cook County Public Defender’s Office has a handy-dandy card you can download and print out which explains how you should respond to police questioning: 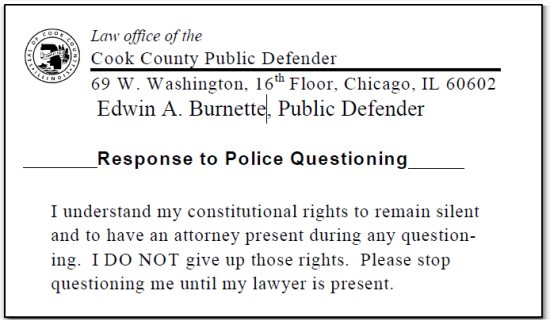 Oh crap. That’s a bit concerning. The current Cook County Public Defender is actually Amy Campanelli. Edwin Burnette hasn’t been the Public Defender since 2009. And checking the metadata on the PDF file, it looks like the card was created back in 2004, so…it’s possible some of those magic words aren’t as powerful as they used to be.

It’s probably just as well, since it’s only a matter of time until some judge rules that “A reasonable police officer could not be expected to correctly guess that the Defendant handed him the card as a response to questioning.”