The news out of Ferguson, Missouri has had me riveted to Twitter. St. Louis Alderman Antonio French has been tweeting and posting Vine videos from Ferguson for days, and Wesley Lowery from the Washington Post has been tweeting regularly and he’s got an article up. If you haven’t been following the story, Dara Lind at Vox has a pretty good summary. 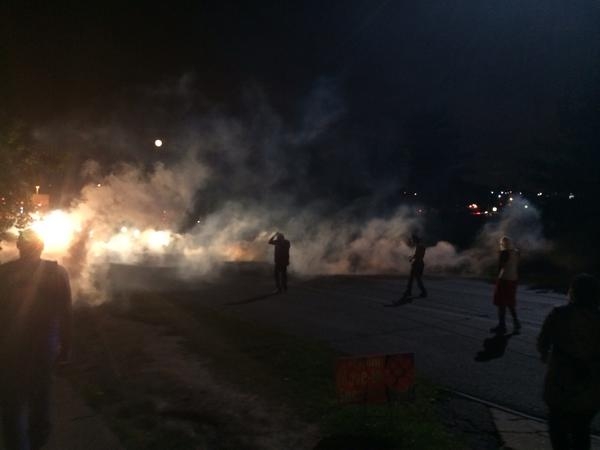 When this story first broke, I found myself conflicted over how to react to it. I was angry that a police officer shot Michael Brown for no good reason…if that’s really what happened. There’s been no definitive information either way, but subsequent events have not exactly painted a rosy picture of the Ferguson Police Department.

About a year and a half ago, I blogged about Colin Flaherty’s racist slant on news reports of black violence:

You can see what Flaherty’s doing here. He has obsessively curated a collection of reports of violent incidents at establishments frequented by black people, probably because they are in black neighborhoods. These are real incidents — sometimes an idiot cutting in line at a sale, and sometimes a dozen or so kids who might be gang members — but Flaherty tries to portray these incidents as mob action by attributing the violence to every black person in the building. Thus a fight between a handful of teenagers in a mall food court becomes, in his mind, a riot by every black person in the mall.

I’ve seen a bit of the same thing on Twitter and in some news reports regarding the events in Ferguson. The first night, right after the shooting, everything actually went pretty smoothly in Ferguson and the protests ended somewhat peacefully. However, there were several reports of protesters chanting “Kill the police!” But from what I could find, it sounds like at most a handful of protesters might have yelled that, and some people just attributed it to all the protesters.

On Sunday night some protesters were looting stores, at least one of which was set on fire.

Monday night’s protests were more peaceful, but the police responded in force, apparently using Warrior Cop as a guidebook for dealing with protesting citizens. They eventually cleared the streets with tear gas and some kind of non-lethal projectiles. They also ordered the press in particular to leave the area — even calling press offices and telling them to call in their reporters — which doesn’t sound legal.

It’s not generally a good sign when government forces don’t want the press around, although it’s hard to believe they thought they could keep anything shady out of the news in an age when so many people have cell phones. For example, Ray Downs at the Riverfront Times has protester-recorded video of cops reportedly launching tear gas at people standing in their own yard. (Note: There is rather a lot of swearing.)

That’s not to say the professional press hasn’t been getting some good pictures. In part, that’s because the protesters are making an effort to set them up. I’m particularly impressed by this emerging protest tactic captured by Ben Kesling of the Wall Street Journal. 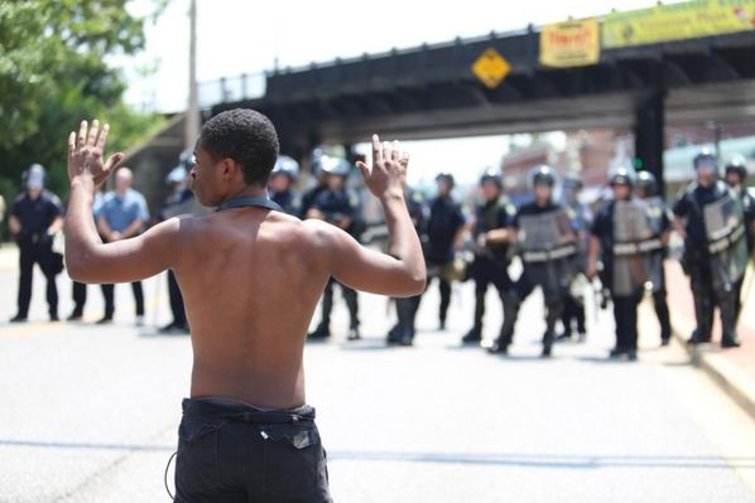 Here’s another one by journalism student Markia Holt: 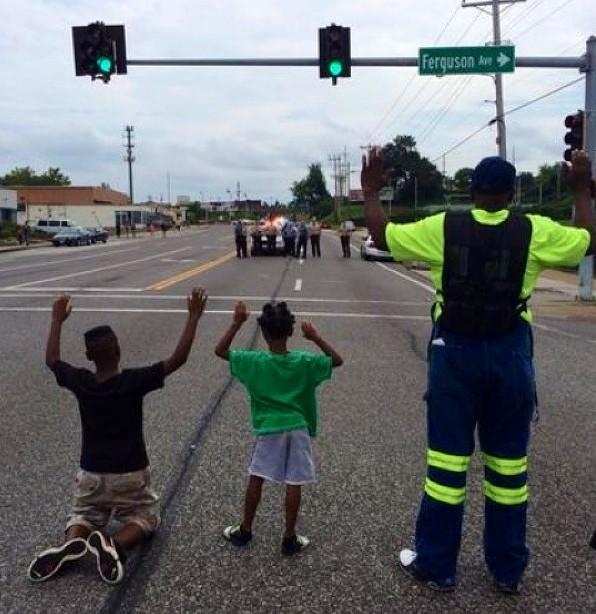 I think that’s just brilliant. By holding up their hands and yelling “Don’t Shoot,” they are submitting to authority, and yet because Michael Brown was supposedly doing the same thing when he was shot, they are rather vividly calling to mind the police violence that started it all. They’ve managed to add an undertone of “fuck you” to a surrender ritual. It’s almost Gandhi-esque.

One more example, this time from Whitney Curtis of the New York Times. I’ve been seeing this everywhere: 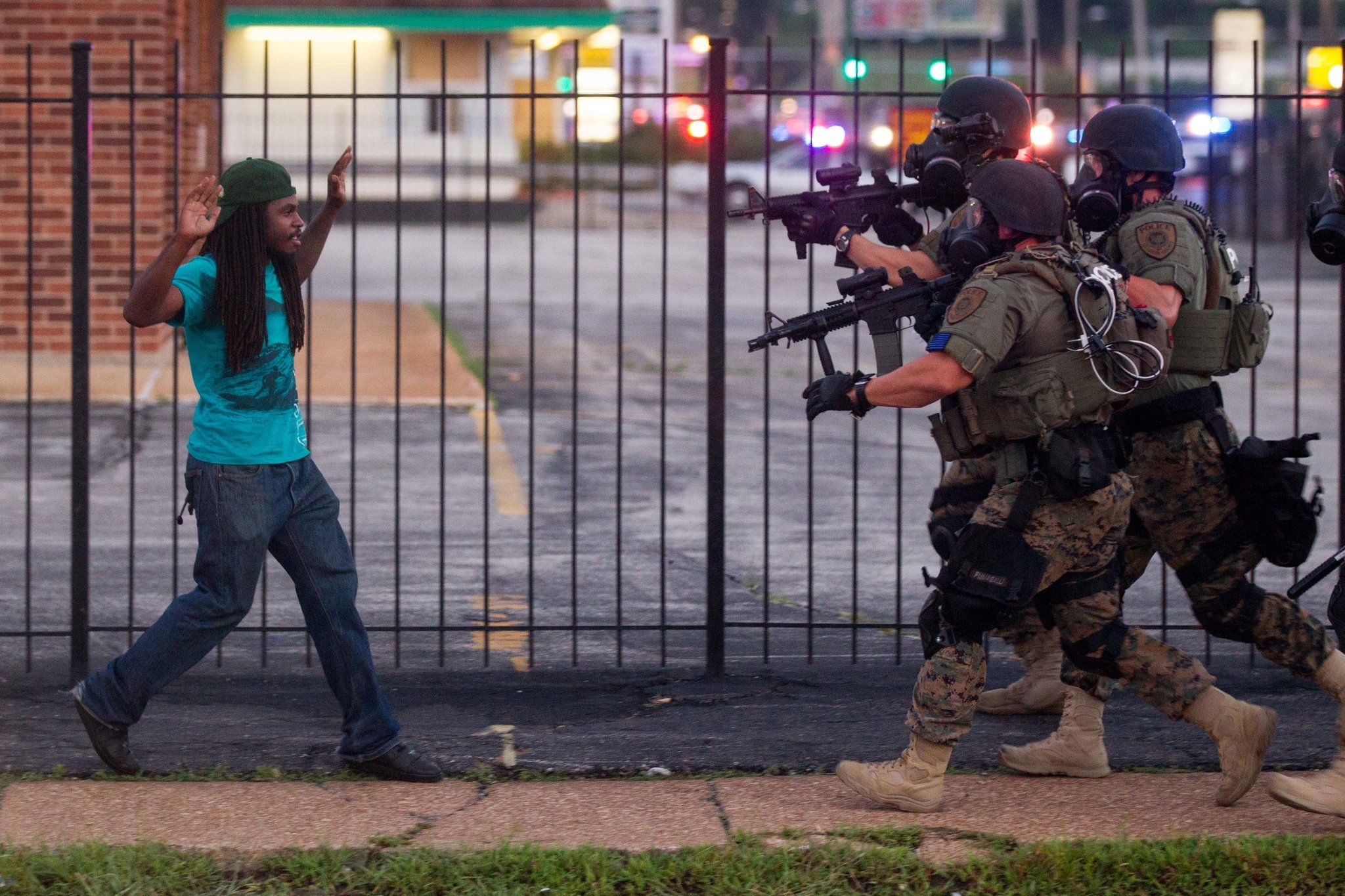 That photo image is a little fuzzy, but in tribute to the late Joel Rosenberg, firearms instructor and a one-time co-blogger here, I think I have to make one particular comment: Get your finger off the trigger, dumbass! 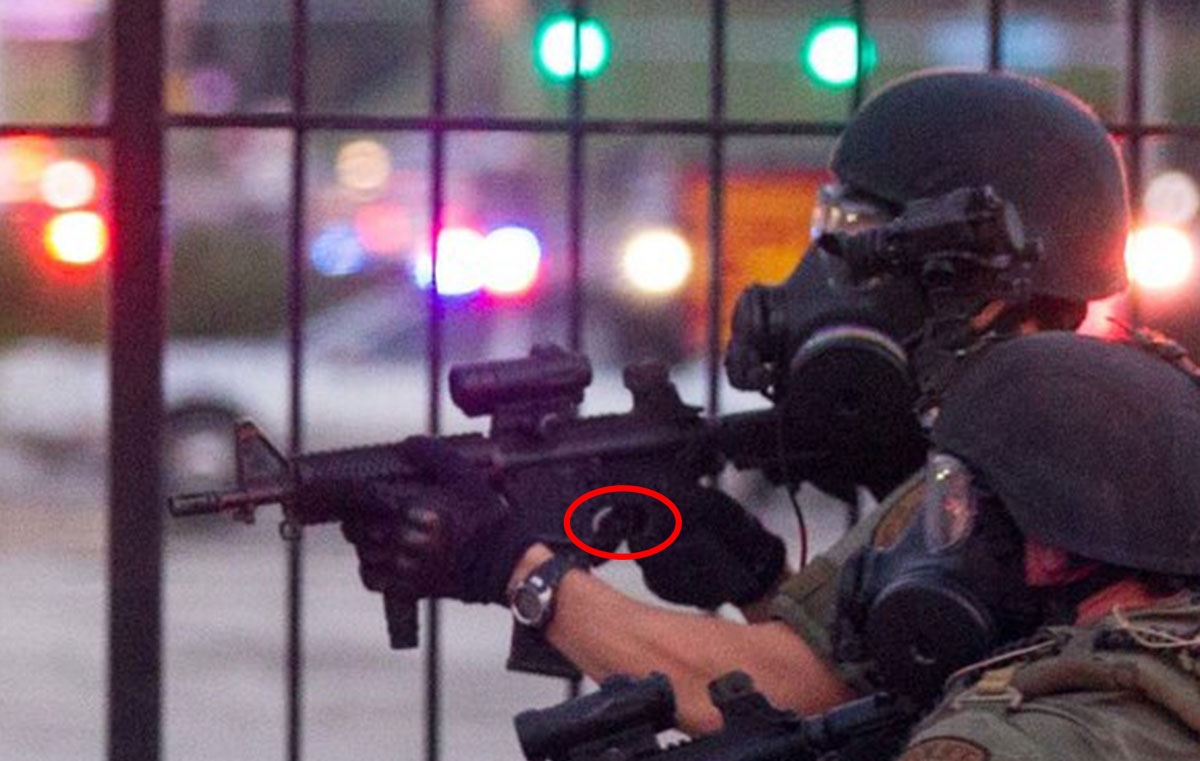 It’s still not clear what the hell happened Saturday night between Michael Brown and the officer who killed him. As I’m writing this, St. Louis County Police have not released many details from their investigation. As is usually the case, they haven’t even released the name of the officer who shot Brown. Given the unrest in the streets, I can understand their concern for the officer’s safety, especially if he has a family. On the other hand, you know what we call it when anonymous government functionaries kill citizens without consequence? A death squad. Let’s hope the St. Louis County police eventually see their way toward transparency.

One thing the police have revealed about the shooting is their contention that Brown attacked the officer in his car and tried to take his gun. As I mentioned before, this kind of close quarters struggle over a weapon is just about the only situation that could justify shooting an unarmed man.

In an interview with Trymaine Lee at MSNBC, a friend of Brown’s named Dorian Johnson tells a very different story:

“They’re not wrestling so much as his arm went from his throat to now clenched on his shirt,” Johnson explained of the scene between Brown and the officer. “It’s like tug of war. He’s trying to pull him in. He’s pulling away, that’s when I heard, ‘I’m gonna shoot you.’”

“I seen the barrel of the gun pointed at my friend,” he said. “He had it pointed at him and said ‘I’ll shoot,’ one more time.”

A second later Johnson said he heard the first shot go off.

“I seen the fire come out of the barrell,” he said. “I could see so vividly what was going on because I was so close.”

Johnson says he was within arm’s reach of both Brown and the officer. He looked over at Brown and saw blood pooling through his shirt on the right side of the body.

“The whole time [the officer] was holding my friend until the gun went off,” Johnson noted.

Brown and Johnson took off running together. There were three cars lined up along the side of the street. Johnson says he ducked behind the first car, whose two passengers were screaming. Crouching down a bit, he watched Brown run past.

“Keep running, bro!,” he said Brown yelled. Then Brown yelled it a second time. Those would be the last words Johnson’s friend, “Big Mike,” would ever say to him.

Brown made it past the third car. Then, “blam!” the officer took his second shot, striking Brown in the back. At that point, Johnson says Brown stopped, turned with his hands up and said “I don’t have a gun, stop shooting!”

By that point, Johnson says the officer and Brown were face-to-face. The officer then fired several more shots. Johnson described watching Brown go from standing with his hands up to crumbling to the ground and curling into a fetal position.

It sounds plausible, and the struggle at the car comports with police claims. I think it’s possible that the officer and Brown got into some kind of struggle — perhaps when the officer pulled up and grabbed him — and perhaps the officer got angry and shot… Or perhaps, from his standing position outside the car, Brown started to get the better of the officer, who felt the need to pull his gun and defend himself… I can almost make this work as a terrible misunderstanding…

But not if the rest of Johnson’s story is true. Not if the officer shot a fleeing man in the back and then gunned him down as he surrendered. That would be murder.

Of course, Dorian Johnson could be lying. I have no way of knowing. I’ve heard that other witness accounts are similar, but I don’t know much about them.

The police are supposed to be investigating, but they’ve been behaving a little strangely. For one thing, as of earlier today they still haven’t interviewed Johnson, according to his lawyer. I don’t know how the police normally handle these kinds of investigations, but I would think a close eyewitness is someone they’d want to talk to. Even if they think Johnson is a lying little weasel who’s covering for his dead friend, wouldn’t investigators at least want to get his statement to lock it down?

Then there’s the autopsy, about which something was just released:

It shows he died as the result of gunshot wounds. Police won’t specify how many times the teen was shot.

The autopsy was done by the St. Louis County Medical Examiner’s office on Sunday, the day after Brown was shot.

Police won’t release any further details of the autopsy, pending the results of toxicology tests. Those should be available in the next four weeks.

I’m not sure why the police would be delaying the release of this information. They’re going to have to release the body to the family pretty soon, at which point the family will be able to get their own answers.

One of the things I’ve been trying to understand is why this killing has produced such an explosive reaction. There wasn’t this much of a reaction when NYPD Officer Daniel Pantaleo apparently strangled Eric Garner. And there wasn’t this much protesting when Beavercreek, Ohio police officers Sean Williams and David Darkow shot John Crawford III after he failed to put down a realistic-looking air rifle. But then I guess I’m answering my own question. There has been a rash of killings of black men by cops, including Ezell Ford, killed in LA on Monday. Not all necessarily the result of evil intent, but killings nonetheless.

Meanwhile, night has fallen on Ferguson, and Twitter is full of rumors of a shooting. 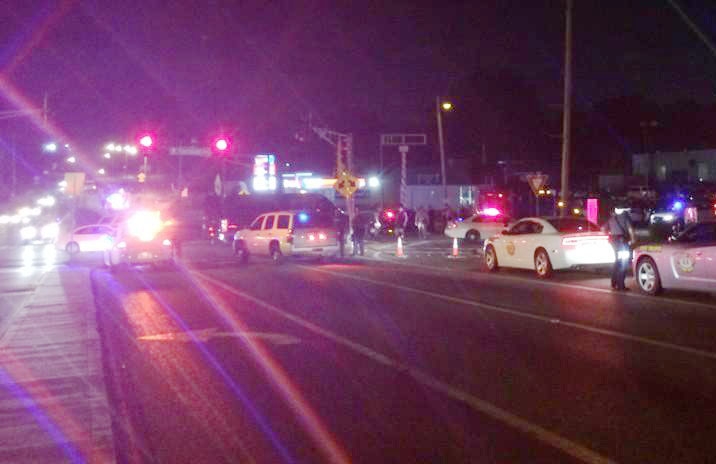