I think the reaction to the Hobby Lobby case is going to make me mental. Case in point: 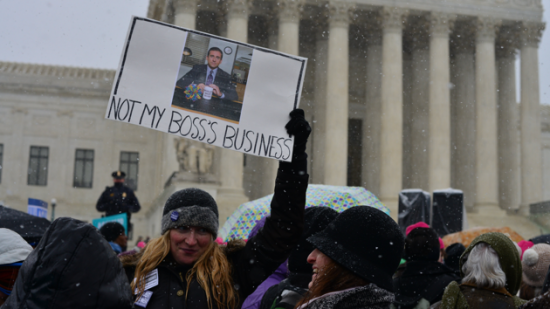 That’s from a Mother Jones article by Erika Eichelberger and Molly Redden titled “In Hobby Lobby Case, the Supreme Court Chooses Religion Over Science”. Does the young woman holding the sign realize that she’s saying it’s not her boss’s business that she wants him to pay for her contraception? This is as dumb as those right-wing protesters who want to “keep the government out of my Medicare.” If she doesn’t want her boss involved, she can buy the contraceptives herself. It’s her insistence that her employee health insurance should cover contraception that causes her employer to be involved.

As for the Mother Jones article’s main point about science and religion,

According to the Food and Drug Administration, all four of the contraceptive methods Hobby Lobby objects to—Plan B, Ella, and two intrauterine devices—do not prevent the implantation of a fertilized egg into the uterus, which the owners of Hobby Lobby consider abortion. Instead, these methods prevent fertilization.

I’m not sure that’s a completely accurate description when it comes to some forms of IUD. My admittedly sketchy understanding is that if an egg does get fertilized, the IUD could interfere with implantation, which meets some religious people’s definitions of abortion, which they regard as the murder of babies. That may not actually be true, but it’s what a lot of people believe, which is pretty much the definition of religion.

However, it’s not the Supreme Court that is choosing religion over science. Congress did that when they passed the Religious Freedom Restoration Act (RFRA). When a later Congress passed the Affordable Care Act (ACA, also called Obamacare), they left the choice of required insurance coverage up to the regulatory bodies of the Executive branch. However, because they were either neglectful or cowardly, Congress failed to specify how to resolve conflicts between RFRA and ACA. The Obama administration chose to require contraception coverage, the folks at Hobby Lobby objected, and the whole mess dragged through the court system until it was finally resolved by the Supreme Court.

As I’ve said before, this is a stupid way to run a healthcare system. All of this fuss is about four items in the ACA required formulary. All of this fighting is about a benefit which Megan McArdle argues is worth about $300 per year to the fraction of the population that uses it. When you make the provision of healthcare a matter of public policy, you make every element of the healthcare system a matter of politics. There are going to be a lot more battles like this one.