So last weekend I had a conversation with my wife that went something like this:

Me: I’ve got some busy evenings this week. On Tuesday…um, this is going to be one of those awkward conversations…

Her: As long as you’re not seeing any hookers.

(silence for a few seconds)

Me: How about a retired hooker?

Her: That would be okay.

Maggie McNeill is the retired escort who blogs at The Honest Courtesan., and she has been on a driving tour of the country to promote her book, Ladies of the Night, which is a collection of short stories in various genres featuring members of the oldest profession. Both the book and her appearances are also opportunities to promote sex worker rights. I dropped in on her Tuesday evening appearance at a Liberty On the Rocks meeting at the Goose Island Brewpub on Clybourn. 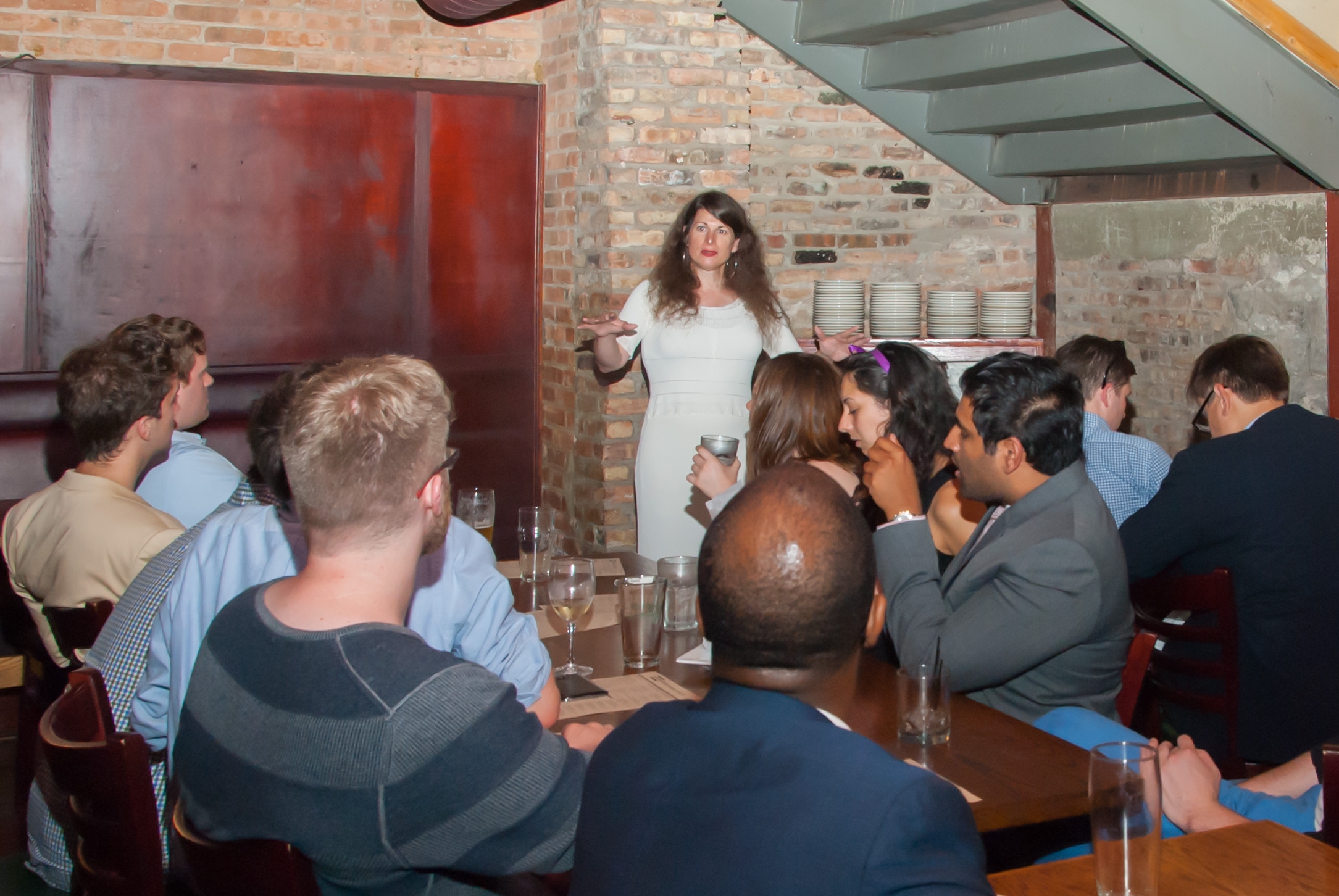 Maggie wasn’t the only sex worker there. Serpent Libertine from SWOP Chicago was sitting at a corner, and I briefly said hello because I’d like to interview her someday about sex work activism in Chicago (assuming I ever get around to doing actual journalism again). A couple of male sex workers spoke up at the meeting as well.

I chatted with Maggie for a few minutes before her presentation, and I told her that before I started learning about prostitution enforcement through her blog, I hadn’t realized that the United States actually has one of the harshest anti-prostitution legal environments in the developed world. To emphasize this, I then somewhat ironically suggested that that the much-hated Swedish model of legalization, which emphasizes prosecuting clients and pimps instead of prostitutes, seemed like it would actually be an improvement. This turned out to be a mistake, because it derailed Maggie into explaining the problems of the Swedish model, which I kind of already know from reading her blog. Maggie was very patient and polite about it, though.

Many of the things Maggie spoke about will be familiar to regular followers of her blog, but it was still worth the trip to hear her talk about them. Her presentation ties it all together in a way that a series of blog posts just don’t.

Some of what she had to say was kind of depressing. We’re at a time when gay marriage is increasingly recognized and marijuana legalization is breaking out all over, yet sex worker rights have had some recent setbacks from dangerous legislation. I find it particularly worrying that Maggie describes a trend toward fighting prostitution with anti-racketeering prosecutions. That way leads down the same road to hell that the War on Drugs has been on for 40 years.

The cops and prosecutors and their enablers aren’t calling it the “War on Prostitution” however. Most people don’t really see prostitution as a threat to society or — perhaps more importantly when trying to stir up a moral panic– to society’s children. Instead, there’s been an increasing emphasis on “sex trafficking.” With the specter of strange men who will kidnap your children and force them into sex slavery, it’s a lot easier to get funding for anti-trafficking task forces and pass “tough” anti-trafficking legislation.

But since actual sex slavery is very rare in this country, they end up busting pretty much the same people they would have busted for prostitution. Then prosecutors pick a few of them to be charged with trafficking, perhaps for handling money or answering a phone, or perhaps just for being male. Clients get swept up for trafficking, as do male and transgendered sex workers. Sometimes sex workers are charged with trafficking each other.

All of this is a worrisome development. Maggie doesn’t quite reach Balko-esque levels of gut-punch, but the thought of the drug war’s industrialized system of arrest and incarceration metastasizing into sex work is depressing. On the other hand, just being in the room with people like Maggie and Serpent Libertine is kind of exciting. It feels a bit like being at the start of a civil rights movement.

I say “a bit” because I know that feeling is mostly subjective. It comes not because a sex worker rights movement is starting but because I’m learning so much more about it lately. The modern sex worker rights movement in the United States goes back at least as far as Margo St. James and COYOTE in the 1970s, and there has been a lot of progress by sex worker’s rights movements in other countries. (I’m pretty sure what I’m feeling is the same thing that leads journalists to write stories about a “new trend” they just heard about, no matter how long it’s actually been going on.) In some sense, my interest in the sex workers’ rights movement is actually a product of the movement’s outreach to non-sex-workers.

In any case, if Maggie comes to your town, it’s worth your time to meet her and hear what she has to say.