Last spring, our cat Ripley passed away after a somewhat lengthy period of illness. It was a very sad time for us. My wife was especially heartbroken, as Ripley had been the first cat we adopted after a catless period that followed the death of her previous cat.

As is my way, I had put up a post about Ripley’s passing. Unbeknownst to me, someone over at the Opinionated Pussycat noticed it and posted a rather wonderful eulogy for Ripley which was picked up by The Cat Blogosphere, and a couple of dozen people stopped by in the comments to leave their condolences. It was very touching, and it helped.

I mention all this because we just found out that PDgirl‘s cat Simon — a foundling she’s only had since October — got so sick that she had to put him down. 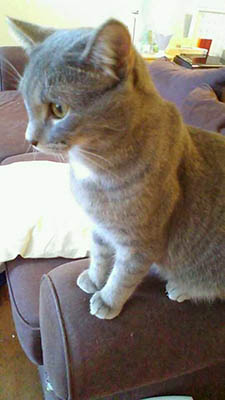 I can remember how excited she was when she got him, and I know how cats can break your heart. So if you get a chance, stop by her farewell post for Simon, and send some comfort her way. I have the feeling she’ll need it.

Update: This post is now in the 512th Carnival of the Cats at Opinionated Pussycat.