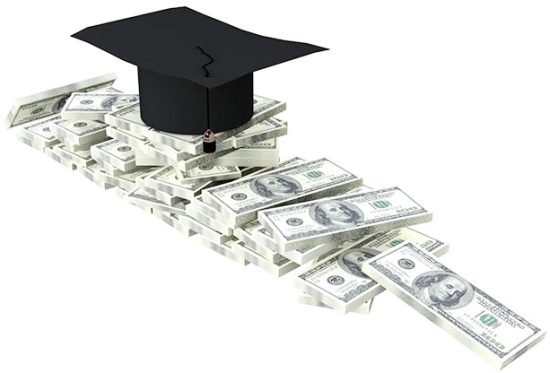 My plan for broad student debt cancellation will:

Naturally, Democratic presidential candidate Bernie Sanders has his own plan to deal with college debt:

When Bernie is in the White House, he will:

There are a lot of things wrong with this idea.

For one thing, it’s not an incentive mechanism. Most of the time, when we as a society give money to someone for doing something, it’s because we want to encourage that activity. So we subsidize solar energy to encourage development of cleaner energy sources, and we subsidize housing to encourage home construction and ownership. Subsidizing certain things is usually a way to encourage socially desirable behavior.

But that’s not the case here: Student debt cancellation does nothing to encourage students to go to college because it only affects people who have already been to college. It’s a pure giveaway (that just happens to be going to a bunch of young people who are likely to vote).

First of all, we’re not exactly talking about gigantic loans. 45 million people owing $1.6 trillion works out to about $36,000 per person. That’s not a “crippling” debt. Most of the time, when you hear really high numbers, it’s for people getting loans for advanced degrees such as law or medicine. The average college debt is more like financing a well-equipped Ford Taurus.

Keep in mind, too, that people with college degrees tend to earn more money. According to the most recent Education Pays report,

That difference alone is enough to theoretically pay off a $36,000 student debt in a little over two years at peak earnings. Even taking other costs into account — including the opportunity cost of going to college instead of working — a college education is a good investment:

The median four-year college graduate who enrolls at age 18 and graduates in four years can expect to earn enough relative to the median high school graduate by age 34 to compensate for being out of the labor force for four years and for paying the full tuition and fees and books and supplies without any grant aid.

In other words, paying off the tuition debts of college graduates means giving free money to  people who are already destined to be financially better off than most.

Furthermore, getting a college education is just one way of investing in your future. There are plenty of small business owners who have spent $36,000 to equip a restaurant or machine shop, or remodel an office. I’m sure they would also benefit if Elizabeth Warren or Bernie Sanders cancelled their debt.

Or what about people who took out loans to pay for college tuition and just now finished paying off their debt? They’ve got to feel cheated by all this. And it’s hard to argue that their case is much different, because I’m sure giving them $36,000 would help them buy a house or start a business too.

We should also consider the classic invisible people: Those who didn’t go to college because they couldn’t afford it. Imagine what it’s like the be a woman who made the prudent decision to stick with waitressing for a few more years only to hear that people who went to college are getting a $36,000 handout. Why shouldn’t she get $36,000 too? She probably needs the money more, and giving it to her would be at least as much of a stimulus as giving it to a college student.

Or for that matter, we could just let taxpayers have the money. All other things being equal, not paying college graduates $1.6 trillion would leave $4900 for every man, woman, and child in the United States.

I should note that there is one group of people for whom debt cancellation makes some sense: People who went to college but did not graduate. These people are seriously screwed, because they’ve got the debt — for the cost of however many years as they went to college — but they don’t receive any of the benefits that come with earning a degree. And unlike college graduates, these people really are likely to be poor, so getting out from under the debt will be a serious struggle.

It’s almost like we need a debt cancellation program that is targeted to these people. Maybe some sort of means-tested program, that only cancels their debt if they really are having difficulty paying it down…

Of course, the U.S. already has such a program. It’s called bankruptcy. When someone has debts they can’t pay, declaring bankruptcy allows them to get out from under the debt and move on. The lender does take a loss when a debtor declares bankruptcy, but if the debtor was never really able to pay the loan, then the lender is really just recognizing a loss that has already occurred. And the great thing about bankruptcy is that it works for everyone who’s in debt over their head, not just college students.

Although, actually…college tuition loans are one of the few debts that cannot be discharged through the ordinary bankruptcy process. A series of murky changes to bankruptcy law since the 1970s have made it much harder to get out from under student loans. It can be done, but the process is poorly defined and applicants are unlikely to succeed.

While I question the wisdom of giving gobs of money to college graduates, I think it makes no sense to block people with tuition debt from having the same bankruptcy protections as everyone else. The good news is that there’s actually a bill that would fix this problem. It’s the Student Loan Borrower Bankruptcy Act of 2019, which is supported by both Sanders and Warren. Let’s use the debt protections we have, rather than inventing expensive new ones.