Here’s everything wrong with feminist anti-sexwork thinking in one tweet:

While there are clearly sex workers by choice, the majority globally are there because of poverty, homelessness etc. Aka lack of choice.

In case that wasn’t formatted right, that’s Lena Dunham, who opposes Amnesty International’s proposal to decriminalize prostitution, tweeting “While there are clearly sex workers by choice, the majority globally are there because of poverty, homelessness etc. Aka lack of choice.”

When she talks about “sex workers by choice,” I assume she’s talking about vocal activists who have made it clear that they think sex work is a great job. Around here that’s folks like Maggie McNeill, Mistress Matisse, Brooke Magnanti, Serpent Libertine, Furry Girl, and the whole Tits & Sass crowd. These are the sex workers (or former sex workers) who are speaking out in favor of Amnesty’s proposal, and who are arguing against Dunham’s condemnation of it.

The implication is that these women are special cases — sex work’s 1 percent — who have chosen sex work freely, and who are not representative of the vast majority of sex workers, especially worldwide, who are not doing sex work by choice.

If by “lack of choice” she meant coercive sex trafficking, she’d have a point, because by definition the victims of sex trafficking have no choice: They are slaves, and they are rape victims. There’s little evidence, however, that these victims are more than a small minority of sex workers, and in any case, Amnesty International is not proposing to legalize slavery and rape.

When Dunham writes “the majority globally are there because of poverty, homelessness etc,” she’s talking about poor women, often in developing countries, whose choices are severely limited by economics. The do sex work out of necessity, and Dunham doesn’t think that’s really much of a choice.

Unfortunately, statements like Dunham’s confuse the issue because they conflate two different meanings of the concept of choice, which can be defined as:

: a range of things that can be chosen

The set of options available to you is outside your control. It depends on factors like your genetics, how you were raised, what society you were born into, what kind of people you met, and what kind of options they offered you. This kind of choice is about where life takes you, and a lot of it is just a matter of luck.

On the other hand, when activists talk about people choosing sex work, they are talking about the first definition: Women who, given the options available to them, have chosen to do sex work. A big part of the anti-sex-work message is the claim that no women would choose to be a prostitute, that all prostitutes are “prostituted” by someone, that they are all victims of human traffickers and pimps. One of the ways sex work activists counter those claims is to tell their own stories about the choices they made.

This is not to say that they chose that line of work from a field of infinite possibilities, but that they freely choose from the options available to them. And of course women living in “poverty, homelessness etc” have to choose from a smaller array of options.

Economist Amartya Sen has argued that the range of choices available to people is a better measure of comparative quality of life than the usual measures of income or consumption because it captures the value of having choices: All other things being equal, having access to a Walmart that sells 140,000 items makes your life better, and earning $50,000 in a free country is better than earning $50,000 in a totalitarian state. So when Dunham and others talk about “poverty, homelessness etc” limiting women’s choices, that’s another way of saying these women are poor.

We now arrive at the point where I really have trouble following the logic: If these poor women are choosing sex work because they have so few choices, you’d think the solution would be to offer them more choices, wouldn’t you? But if we criminalize the way they earn money, we’re reducing their choices. People who think like Dunham are advocating the very thing they are complaining about.

Or to approach it from a different direction, I’d like to ask Dunham why she thinks these poor women have decided to do sex work. Is she saying they’re too stupid to know better? I’m sure she’d deny it, but how else to explain why she’s disregarding the choices these women made about their own lives?

By definition, these women are trapped in a situation that offers them very few options, none of which are very good. And out of that array of bad options, they chose to do sex work. Doesn’t that mean that every other options was worse? So when you prevent them from doing sex work, aren’t you forcing them to do something that will make their lives worse? These poor women have decided that that sex work — sometimes referred to as “survival sex” — is their best option. It seems arrogant and unwise to think you know better than they do.

Unfortunately, when you try to make this argument, someone inevitably tries to put it in the worst way they can think of: 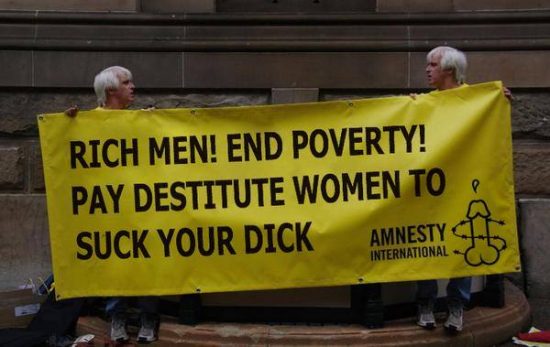 My response is that I could just as easily have started this post with that image and called it “Everything Wrong With Feminist Anti-Sexwork Thinking In One Tweet.”

I’ve got to wonder if the people who made this sign gave any thought to what would happen if rich men took their message to heart and stopped paying poor women for sex. Wouldn’t that make them even poorer?  Do these people imagine that, freed of the option of sex work, the women would all just go out and get better jobs? Or do they think that once those “rich men” can’t pay women for sex, they’ll instead contribute the money to charities for the poor?

Prostitution by poor women is called “survival sex” for a reason. And nothing good happens when you take away someone’s means of survival.