I had thought about a similar issue a few years ago, when writing about threats against the Danish newspaper Jyllands-Posten which had published cartoon images of the prophet Mohammed. In that case, I didn’t see a reason to include any of the images under discussion. As my regular readers are no doubt painfully aware, Windypundit is mostly just a lot of words. I don’t normally include images unless I have to. So the way I saw it, there were only two reasons for including the images in a post: (1) News value, and (2) saying “Fuck you” to assholes.

I have no objections to saying “Fuck you” to assholes, but posting offensive images risks saying “Fuck you” to the wrong people. If a racist politician used the N-word in a speech, and some kind of black militant group assassinated him for it, I see no problem with telling them to go fuck themselves, but I wouldn’t use the N-word to do it. I may want to say “Fuck you for being a terrorist,” but the N-word says “Fuck you for being black.” It’s the wrong message in so many ways.

The Charlie Hebdo images were slightly more complicated because I didn’t even know how to tell if they’re offensive. Translating from the French is the least of the problems. Things like racist epithets and stereotypes are culturally defined in a complicated way, and I wouldn’t have a clue what constitutes anti-Arabic or anti-Muslim material in French culture. The cartoons are not drawn realistically, but I can’t tell which oddities are considered racists stereotypes and which are just the Charlie Hebdo style. Some people say the cartoons are racist and others say they’re just over-the-top satire, and I don’t know who to believe. It’s a messy situation.

I realize not everyone who publishes the images (or signs on to Randazza’s post) feels they are endorsing the content of the cartoons, but that’s how it felt to me.

The other reason for including the offensive images would be if they have legitimate news value. When writing about the Jyllands-Posten images, I thought the actual images were marginally relevant, but there’s no point in embedding a dozen images in a post when I would normally just link to them. Embedding the images would be gratuitous, and therefore just a “Fuck you,” about which please see the previous few paragraphs.

Pretty much the same line of thinking applied to the Charlie Hebdo images, except that the slant of my post was that the people making the images were pretty bold in the face of censorship and violent opposition. In particular, I thought it took big brass balls to publish this image right after their offices were firebombed: 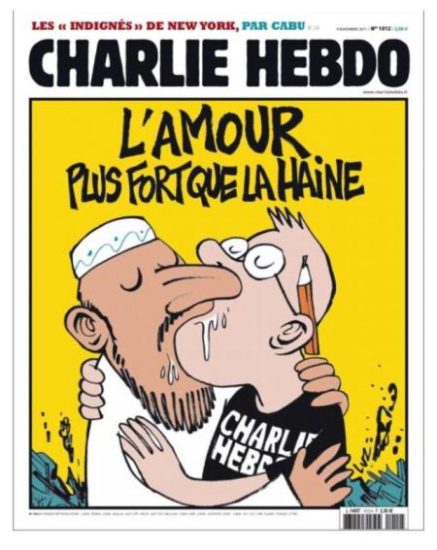 That’s got to be a giant “Fuck you” to the (presumably) homophobic religious nutcases that would firebomb a magazine because they didn’t like the cartoons, and I felt you really have to see the image to understand the magnitude of the message. That’s why I included it in the post. (And of course you need to see the image in this post to understand why I felt that way.)

I have to admit that posting that image also allowed me to issue my own small “Fuck you” to the terrorists in a way that I hope wouldn’t unintentionally offend anyone who doesn’t have it coming. Also, I hope it will be enough to get me past the inevitable gormless trolls who insist that anyone who doesn’t publish the images is a coward.