I am not Charlie.

Honestly, until this shit happened, I didn’t know a damned thing about Charlie Hebdo. I don’t have a clue what Charlie Hebdo stood for, so I’m not about to identify myself with them or support their editorial agenda, whatever it is.

Besides, in my mind, “I am Charlie” links to the scene in the 1960 film Spartacus where rebellious former Roman slaves refuse to identify their leader Spartacus by all claiming “I am Spartacus!” thus consigning themselves to be crucified alongside him. That’s real dedication to a cause. And as Matt Welch points out, Charlie Hebdo was run by badasses. Their own government went after them for offensive speech and they fought back and won. Muslim extremists firebombed their offices, and six days later they responded with this: 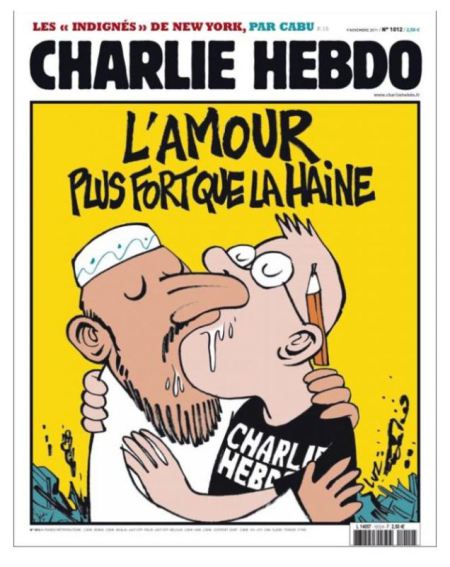 (“Love is stronger than hate.”)

By comparison, I’m publishing this blog from the middle of the United States of America which is still — despite all the problems detailed here on a regular basis — a bastion of free speech. The worst that’s ever happened to me for something I wrote is that people left nasty messages in the comments or said mean things about me on their blog. The worst that’s ever likely to happen to me is that I have to find another job because my employer doesn’t like something I wrote. If someone shoots me, it’s more likely to be my wife than terrorists.

Look, whatever Charlie Hebdo stands for — I don’t know or care what it is — I stand by their right to believe it and say it and publish it. It’s insane to kill someone for drawing comics and saying mean things. The gunmen who shot the Charlie Hebdo writers and artists are a bunch of terrorist assholes, and I want them all to die in a fire.

But my saying so doesn’t get me any points for bravery. I’ve got it easy. I realize that many of the people posting “I am Charlie” don’t mean it this way, so this is not a knock on them, but to me “I am Charlie” feels like trying to portray myself as having courage on a level that is simply not required for what I do. My world is not that dangerous. I am not Charlie.