I spotted this awful meme image on Facebook, from the Being Liberal page: 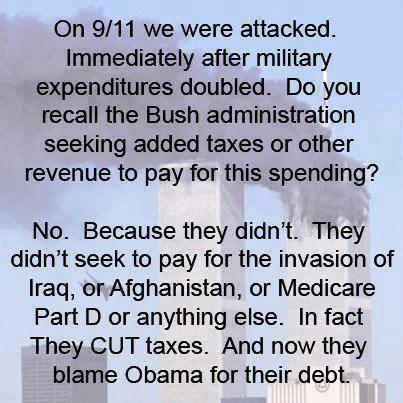 Aside from the poor grammar and gratuitous attention-getting reference to 9/11, its implications about the history of our national debt are just plain wrong.

On 9/11 we were attacked. Immediately after military expenditures doubled. Do you recall the Bush administration seeking added taxes or other revenue to pay for this spending?

No. Because they didn’t. They didn’t seek to pay for the invasion of Iraq, or Afghanistan, or Medicare Part D or anything else. In fact They CUT taxes. And now they blame Obama for their debt.

In some sense this is probably correct. The blurb doesn’t say who “they” are, but I imagine the reference is to Republicans and right-wing pundits, and I’m sure many of them are trying to blame Obama for the debt incurred during the Bush administration, but it’s not as if the debt didn’t get a heck of a lot bigger after Obama took office.

Here’s the available data since 1990: 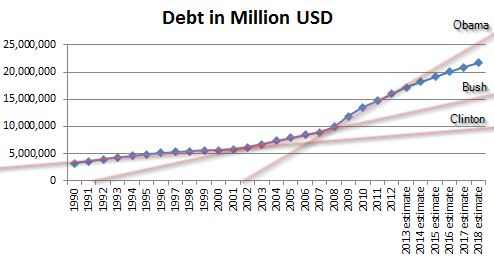 The blue dots and line are the raw data. I added the other lines by hand to give a rough indication of the rate of increase of the debt under each of the last three presidential administrations. You can feel free to quibble with where I drew the lines, but even without them, it’s pretty clear that the Clinton years were great for debt hawks, with relatively little debt growth at all. (I think these are nominal figures, so that may just be inflation rather than real debt growth.)

Debt growth under the Bush administration was somewhat steeper, probably for all the reasons mentioned in the meme image. But then starting with the Obama era, the debt begins to climb even faster. (It starts to tail off toward the end, but note that those are based on estimated budget figures, not actual results.)

It looks even worse when you plot debt as a percentage of national income: 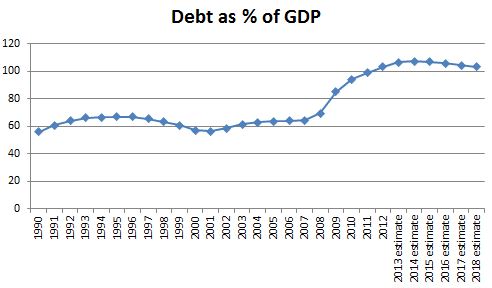 I didn’t draw any slope lines this time, but you can see how well-off we were in the 1990s as the debt actually stopped climbing and started to decline. The Bush era erased that decline, and the Obama era blew it out of the water. (Again, the decline at the end is based on estimates.)

Timing does not necessarily identify causation, of course. Just as Bush was not responsible for the dot-com crash and recession that he inherited from Clinton, Obama was not responsible for the bank panic and recession that he inherited from Bush. And it’s not clear to me that any president had much responsibility for the recessions that started under their terms. Taxation and spending — and for that matter, banking policy — are under the control of Congress rather than the President. And much of the skyrocketing debt from Obama’s first years in office was due to the massive stimulus package passed by both parties.

Whoever you choose to blame, the size of the debt is pretty disturbing.

(All data drawn from the White House Office of Management and Budget historic budget tables.)