Saw this from Steve Marmel: 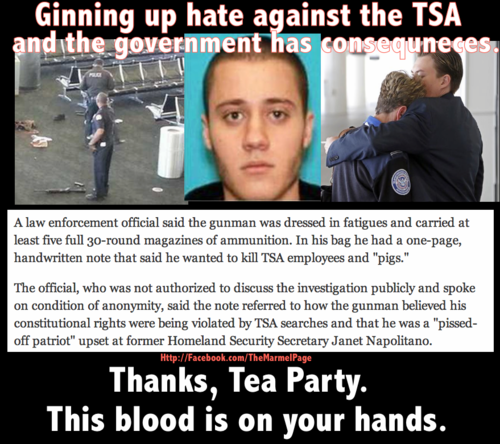 Marmel’s contribution is these parts:

Ginning up hate against the TSA and the government has consequences.

Thanks, Tea Party. This blood is on your hands.

I’m not in the Tea Party (whatever that is these days), but I do believe the TSA routinely violates our rights, and that internal checkpoints are a hallmark of an authoritarian state. I would like to see the TSA disbanded, especially the fucking VIPR teams. But that doesn’t mean I take any pleasure from an agent getting shot. I’ve never advocated violence against the TSA, and I don’t think you’ll find any actual Tea Party leaders who did, either.

The shooter sounds like an angry, evil little prick, and unless someone turns up real evidence of a conspiracy, he’s the only one to blame. Don’t try to pin this on those of us who speak out against the excesses of the TSA and the government in general. We’re not responsible for how crazy people react to what we say.

There’s no contradiction in saying that this shooting of a TSA agent is a tragedy and that the TSA is still a bunch of douchebags who trample our freedom.