I see lots of political and policy commentary go by on Facebook, and I’d like to respond to some of it, but Facebook is a very annoying place for that kind of give-and-take. People don’t write articles or blog posts on Facebook, they post images with text in them, and the only response you can provide is a brief comment. It’s not as bad as Twitter, but it’s not a great format for they way I write — Windypundit has turned out to be more than just a reference to my hometown.

For example, I saw this the other day: 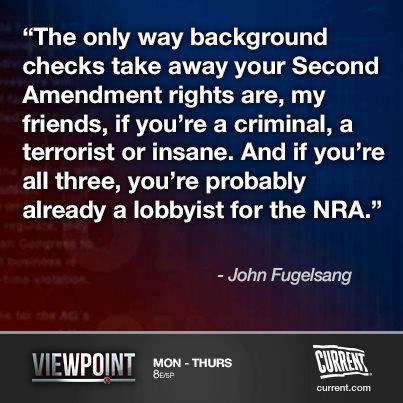 Then why don’t we have waiting lists for any of the other rights mentioned in the Bill of Rights? Freedom of speech, freedom of religion, freedom of the press, the right to remain silent, the right to counsel…hell, that last one, if you can’t afford a lawyer, the government pays for one for you.

In an earlier era, some states required literacy or citizenship tests in order for people to vote, supposedly to ensure that voters had some minimal level of intelligence and were able to understand the issues. In reality, this was a way to stop African Americans from voting, sometimes by blatantly requiring them to take more difficult tests. And today, whenever some Republican proposes stricter voter registration–requiring say, bringing ID to a voter registration office–progressives point out that this will tend to suppress the vote of poor people, mostly minorities, who don’t have the easy ability to take time off from work, or don’t have a car to drive 30 miles to the registration office.

Gun owners have similar concerns about background checks — that they will create an excessive burden on gun owners, or that government officials will abuse them to deny gun transfers arbitrarily. For example, when gun control advocates were pushing the Brady Bill to require waiting periods and background checks, opponents pointed out a curious thing about the bill: It required gun stores to get a background check on potential buyers before selling them a gun, but it did not require any government agency to perform a background check and produce a result in a timely manner. Governments could have denied otherwise lawful purchases by simply not fulfilling background check requests.

And speaking of the Brady Bill…it’s now the Brady Handgun Violence Prevention Act. It passed. It’s the law of the land. All federally licensed gun dealers are required to conduct background checks on buyers through NICS. So don’t think that just because the “background checks” bill didn’t pass that there are no background checks.

You may not find any of these arguments convincing, but you wouldn’t have to be crazy, insane, or an NRA lobbyist to believe there’s something to them.