There’s been an interesting discussion of manufactured apparent expertise over at SJ, which appears to have inspired Bennett to weigh in here.

The spark for the discussion was one of the many blogs that not-quite-promises to generate huge wads of cash for lawyers by gaming social media and them what loves it:

The thought of becoming an “expert” in 6 months may seem impossible to you. But I did it and I’m going to show you how.
But first let me share my story with you a bit because I think it’s instructive.

Well, yeah, it was instructive:  I learned that somebody can, with some study and careful choice, become acknowledged by Google as an expert in some subject he may or may not give a damn about in less time than it takes to make a baby.

I mean, seriously — this guy spent only six months studying this stuff, and then he’s an expert?  Sheesh.

So, there I was, last weekend, giving a speech, billed as “Second Amendment Expert Joel Rosenberg”.  (The speech is here; you can watch it, if you don’t mind downloading a quarter gig — one of the many things I’m not an expert in is turning a long .MOV video into a shorter one in some other format.)  I think it was a decent speech, and was well-received, by and large, by the crowd.   (And it was actually a lot of good, clean fun quoting Hillary Clinton and Hubert Humphrey to a crowd of conservatives, and then telling them an Eleanor Roosevelt story.  When it comes to issues around rights, there are folks who get it — and who, alas, don’t — all along the political spectra, which was one of the points that I was trying to make.  Successfully?  I’m the last person to be an expert on that.)

I don’t fault the organizers of the event for billing me that way, and that’s not just a reluctance to bite the hand that helped me up on to the stage.  I was invited there to talk about the Second Amendment, and it’s a matter that I do have some knowledge of, and a fair amount of passion about. And when it comes to gun laws, Lorman thinks I know enough about them to do a CLE class for cops and lawyers on the subject, so maybe that’s not unreasonable.

Until I put it into context.  I know real experts on the subject, and have read their writings voraciously, for, well, years.  Professor Joseph Olson, who founded Academics for the Second Amendment — now, there’s an expert.  Eugene Volokh?  Ditto.  Glenn Reynolds?  Yup.  Clayton Cramer, an amateur who has written the definitive study on the racist roots of gun control?  You betcha.  (It’s called, perhaps unsurprisingly, “The Racist Roots of Gun Control,” and it’s worth a read.  In my expert/inexpert/whatever opinion.)

Me?  In that context, well, not so much.  Yeah, I started studying the Heller opinion about three minutes after it was posted to the Internet — but it wasn’t me who picked up the implications of the problematic paragraph in it, but Scott (it’s the last sentence on p. 54):

Although we do not undertake an exhaustive historical analysis today of the full scope of the Second Amendment, nothing in our opinion should be taken to cast doubt on longstanding prohibitions on the possession of firearms by felons and the mentally ill, or laws forbidding the carrying of firearms in sensitive places such as schools and government buildings, or laws imposing conditions and qualifications on the commercial sale of arms.

I studied it; Joe Olson, having been one of the midwives of the modern 2A acadmic movement. helped write one of the amicus briefs, and helped Gura prep for oral argument.  That’s an expert.  In that context, if I held myself out as a “Second Amendment Expert,” I’m not sure I could do it with a straight face.

Does that make me an “expert”?  I dunno.

Does remind me of an old joke:

A very successful young bowling ball salesmen brings his parents to the marina, one bright Saturday morning, and takes them aboard his new yacht.  The only time he’s been to sea was on a Carnival Cruise, but he’s bought himself a boat:  it’s fifty feet long, and tricked out with all the nautical gear necessary to sail across the Atlantic, and back.  He excuses himself for a moment, and ducks down the companionway, coming back with dressed out with a neat blue blazer, and ascot, and a 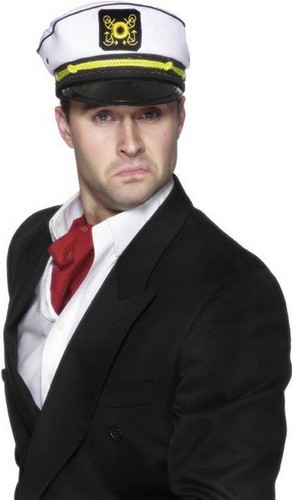 nifty captain’s cap, complete with gold braid and such, on his head.

I don’t mind if others want to call me an expert, not really.  But I’m pretty sure I’m not going to be getting business cards that say, “Joel Rosenberg, Second Amendment Expert.”

Or, for that matter, a captain’s cap.