Today brings the return of one of my favorite new television shows, as Terminator: The Sarah Connor Chronicles begins it’s second season. 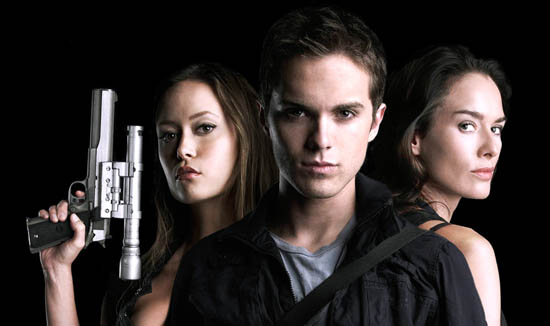 (Spoiler Alert: Spoilers ahead for the entire first season of Terminator: The Sarah Connor Chronicles.)

Producer Josh Friedman and his writing staff have made some interesting creative choices, and they follow the concept and style of the first two movies very carefully. They aren’t trying to re-tell or re-imagine the Terminator saga. Instead, T:SCC picks up where T2 left off, with Sarah Connor and her son John in hiding from the law and from the terminators that will surely follow if they are captured.

The terminator design hasn’t changed much for the series. It must have been tempting to make terminators more human—perhaps by turning them into biological constructs like the Cylons in the new Battlestar Galactica—which would make them harder to detect and open up the story to all sorts of suspenseful “Is he a Terminator?” questions a about various characters.

Instead, the show is going with the classic hyperalloy combat chassis. Terminators are cybernetic organisms: Living tissue over a metal endoskeleton.

Probably the biggest change from the movies is that the characters of Sarah and John Connor have been softened a bit. Some fans have complained that Sarah isn’t as tough and crazy as she was in Terminator 2. That’s true, but don’t forget that the Sarah Connor of T2 had just escaped from the Pescadero mental hospital and she was pissed off about everything. She’s had a couple of years of relatively peaceful life since then, with her son at her side. Besides, it would be very tiresome to watch Lena Headey do Linda Hamilton’s crazy act every week.

John Connor, played by Thomas Dekker, seems to be somewhat less confident than the future leader of humanity ought to be, especially after Ed Furlong’s fearless portrayal in Terminator 2, and there’s no intrinsic explanation for the change, but if he was already tough and independent, there’d be no room for his character to develop further.

The standout character, of course, is Cameron, the terminator sent back in time by John from the future to help John and Sarah now. Named after James Cameron, who created the Terminator franchise, she’s played by Summer Glau, best known for playing River Tam in Firefly. Her performance as Cameron is careful, creepy, and for a pretty young woman, surprisingly unsexual.

Modern digital animators have noticed that as they make their characters more like humans, viewers respond to them more positively. This changes when they reach the stage of being almost-but-not-quite-human. Instead of people seeing them as animated characters with human traits, perceptions reverse, and they see the characters as humans with some creepy non-human characteristics. This phenomenon is called the uncanny valley.

Summer Glau manages to put her performance as Cameron squarely in the uncanny valley, giving her some subtly disturbing qualities. She’s not playing Cameron as a stiff robot, but Cameron’s not a normal girl either. It’s the little things: Cameron looks people straight in the eye and doesn’t pause to think while she’s speaking. She walks with a strange gait, vaguely like a dressage horse showing off, and if she has nothing to do, she stands perfectly still doing nothing. Even when she’s trying to immitate a normal human, her pallet of expressions and is limited, and her pretty smile seems to click into place when needed.

T:SCC pretty much won me over from the pilot episode. School shootings have been a touchy subject, but that didn’t stop the show’s writers from having a terminator walk into a classroom, introduce himself as a substitute teacher named Cromartie, and then start shooting at John Connor in a room full of kids. Cameron then gets to rescue John with the traditional line, “Come with me if you want to live!”

Later, Cameron helps John free Sarah from Cromartie’s clutches, and while she’s fighting with him, John and Sarah abandon her to drive away at high speed. Cameron temporarily defeats Cromartie and then catches up to them on the run and boards their truck without comment. No recriminations, no resentment for being left behind. She’s just doing what she’s been programmed to do.

Sarah and John aren’t just trying to stay alive. They’re actively trying to prevent Judgement Day, the coming apocalyptic attack on humanity by the Skynet defense system. This is critical to the writing of the show. The audience isn’t going to tune in each week to watch the main characters hiding and running. They want characters who take charge and get stuff done.

The usual writer’s crutch in people-on-the-run plots is to have them encounter someone every week who needs their help. (Think of Bill Bixby in every episode of the Incredible Hulk TV series.) If T:SCC did that, the plots could easily get clichéd: Cameron fights mobsters trying to kill a basketball player who refused to throw a game, Cameron enters a “foxy boxing” contest to raise money for a charity, Cameron helps a bunch of nuns build a church…

By giving the characters a quest to find Skynet and strangle it in its cradle, T:SCC gives them something positive to do each week besides helping everybody they meet. The show makes its approach brutally clear in the third episode, “The Turk,” when a girl named Jordan at John’s high school climbs up on the roof, intending to jump. I was expecting John to get Cameron to use her strengh and speed to save the troubled girl, and he does indeed try to help, but Cameron stops him because it would attract too much attention. Jordan jumps off the roof and dies. It’s an important lesson for John, and for us.

My favorite episode so far is the sixth one, “Dungeons and Dragons” in which Derek Reese—Kyle’s brother and therefore John’s uncle—lies wounded in the present and flashes back to the future from whence he came. He remembers being with his brother in the tunnels under the destroyed city of Los Angeles. He is captured by some terminators, and by the time he gets away and returns to the tunnels, everyone is gone, chased out by a Skynet attack.

This was clearly the exact same tunnel attack that his brother Kyle flashes back to in the original Terminator movie, complete with the burned snapshot of Sarah Connor. And in an especially neat touch, Derek later talks to a superior officer whose barely visible name tag reads “Perry.” If you remember, when Kyle Reese was being interrogated by police in the movie, he said he was “with the 132nd under Perry.”

The show is full of interesting moments: Cameron’s encounter with the school grief counselor, Derek’s fondness for plastic explosives, and Sarah tossing a disabled Cameron out the window because it’s easier than carrying her down the stairs. Then there’s the exchange between Charlie and Cameron out in the shed, where she “creeps him the hell out.”

Or what about George Laszlo’s shocking death at the hands of a terminator who looks just like him? Every time I see the scene, with his total incomprehension as the terminator picks him up by the neck and imitates his cries of pain, it just creeps me out.

Due to the writers’ strike, the show’s first season came to an abrupt end after only nine episodes, leaving behind a lot of mysteries which I hope will be addressed this season:

Will FBI agent James Ellison ever have a scene with Sarah or John? So far, he’s never been in the same shot with either of them. You’d think they’d eventually meet, but given that one of the characters—the Hispanic gangster chick played by Sabrina Perez—has been in three episodes without saying anything, or that in nine episodes so far, nobody has ever said the word “terminator,” it’s clear Josh Friedman likes to play tricks. Maybe Ellison will never meet the rest of the cast.

What was going on in the high school with the graffiti doors that drove Jordan to kill herself? Where was that going? Was this somehow Skynet-related? Or was it, as I suspect, someone abusing the students, which would create tension for John as he has to decide between helping the students and his life of hiding from terminators?

What about the other girl, Sheri, with the mysterious father? Was she part of the same trouble Jordan was in, or was this something new?

What does Derek Reese have against Cameron? Is it just that she’s a terminator? Note that when he encounters her in the tunnels, he instantly screams “Metal!” to warn everyone, even though as far as we know, he’s never seen her before. It seems like there’s a more personal issue, as if she did something bad to Derek in the future before John tamed her and sent her back.

What happened to Derek and the other resistance fighters in the basement of that old house where the terminators held them captive? Was cameron down there? Is this why he hates her?

Derek comments on Sarah’s never having killed anyone, and he ingratiates himself with John by introducing him to the young boy who will eventually grow up to be his father. What are Derek’s intentions here? Is he trying to take over?

Is there a Cherry 2000 moment in John’s future? In the eighth episode, “Vick’s Chip,” he cuts open Cameron’s scalp to remove her computer chip. The whole sequence has an intimate feel to it, and when he starts her up again, he’s almost tender about it until he becomes embarassed. There’s a deleted scene from “Dungeons and Dragons” in which Charlie Dixon questions him about his feelings for Cameron. John laughs it off, but she’s in his life every day and she’s not really his sister. John is well aware of the robot inside her, but does that matter to a teenage boy? Is she fully equipped? Does he notice if she smells nice? Is she soft and warm and pleasant to touch? Does John lie awake at night, thinking about ordering her to do certain things?

Also in “Vick’s Chip,” we learn that a now-destroyed terminator had been living as Victor Chamberlin, husband of Barbara Chamberlain. Sarah and Derek discuss whether they would have known, and conclude that they would have. This seems like foreshadowing. Is there some character we’ve already met who’s a terminator? Charlie Dixon used to be engaged to Sarah before all hell broke loose. He can’t be a terminator or he would have killed her and John already, but…if you were Skynet, wouldn’t you want to get close to him in case Sarah ever comes back? I think his wife Michelle is a terminator.

In the season finale, “What He Beheld,” why does Cameron freely tell Morris about the body she has in the trunk of the car? Is it just comic relief—he thinks she’s kidding and asks her to the prom—or is Morris destined to become one of John Connor’s trusted team in the future? And will he have a Cherry 2000 moment? Will he survive it?

When Cromartie, disguised as FBI Agent Robert Kester, kills all those FBI agents in the final episode, why does he let agent Ellison live?

There are a few clues in the trailers that have been released. Probably the most interesting is the extended trailer released at Comic-Con, which is now also available on the Terminator web site here. It starts with a piece of Sarah’s monologue that was filmed to make the video tapes in “The Demon Hand,” but most of it was never aired.

One last thing. The resistance fighters all refer to terminators as metal. There are rumors—unsubstantiated rumors—that we will be seeing some liquid metal this season, if you know what I mean. The folks at The Terminator Files found this hidden on the official terminator web site.