I don’t really know who you are, but it’s all over the blogosphere that you are apparently upset about this picture of you in a bikini: 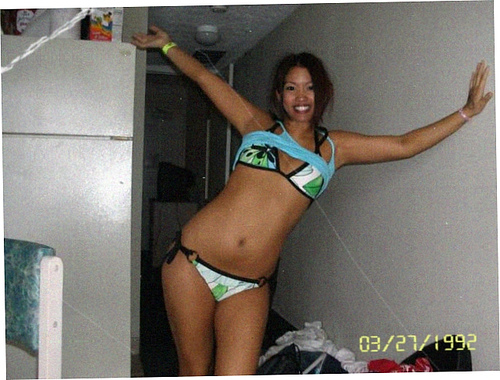 Actually, I see you’re claiming that isn’t a picture of you. You’re saying it’s a fake. I believe it. After all, why would you lie about something like that? It’s not like it’s pornographic or even nude. It’s just a bathing suit.

Yet your reaction was…interesting…

The idiots are so blinded by hate they can’t see a two-bit Photoshop from some hater’s bogus Flickr site? And they couldn’t bother to ask me before attempting to embarrass me and calling me a slut?

Rather than demand that they take their lying lies down, I am asking that they leave their smears up for all the world to see.

I am also filing a complaint with UNC School of Law Professor Muller’s employer. Here’s the dean’s contact information. This has gone too far.

By the way, even if the photo were genuine, posing in a bikini is not the same thing as being a skank.

Which is sort of a good point.

Yet here you are, acting like it’s a terrible thing they’re accusing you of. Wearing a bikini. I mean, I can tell there’s some history there between you folks, but how is a fake picture of you in a bikini a sign of hate? In this later posting, you even talk about suing.

I think your sarcasm detector is a little out of spec.

On the other hand, you seem to be drumming up a lot of traffic for your attackers, and all of it over accusations of a slight character imperfection on your part. In that spirit, I’d like to draw your attention to this exclusive copy of an Olive Garden restaurant receipt proving that on the evening in question you left the waitress a measly 6% tip: 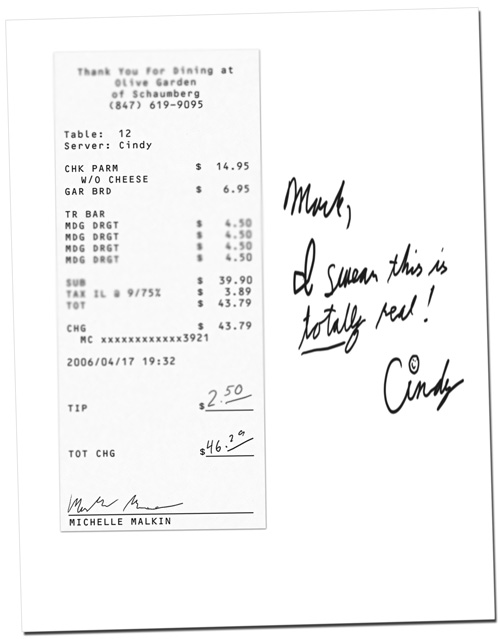 Note that the waitress in question has signed and authenticated this copy for for me, which is proof positive that it’s real.

I am eagerly awaiting all the page hits I’ll get when you respond.

[Update added July 2009: I can’t believe I have to make this explicit, but I guess enough time has passed that the context has been lost and people no longer remember how silly this was, so let me make this plain. The photo is fake. We know this because people have found the original image that had a different head. The receipt is even more fake. I know this because I created it in Photoshop to poke fun at the whole issue.]